Are You Driven by PRINCIPLES or SOCIAL CONFORMITY? (Video) 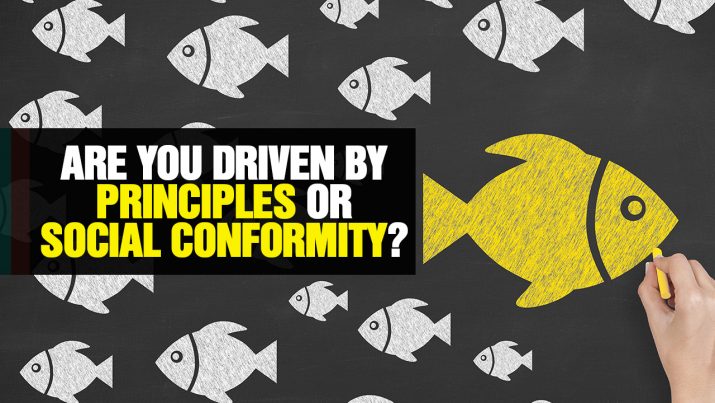 The Health Ranger explains the difference between being driven by principles vs. social conformity.

Podcast Transcript: “Here is one of the most important questions you can ever ask about yourself, as well as those with whom you interact. The question is simple and it tends to divide people into two groups as you’ll soon see. The question is: ‘What drives you? Are you driven by philosophy? Or are you driven by conformity?’ In other words, are you driven by internal principles? So, by philosophy I mean principles or a guide. It could be a guide of ethics or a guide of mission principles – some kind of internal guide that you apply consistently across the board. Or are you driven by social conformity – which means peer pressure. Going with the crowd – even if the crowd is inconsistent. There’s a great example of this that we’ve seen recently. Someone went out and filmed a video of Millennials responding to these tax reform suggestions, and the tax reform suggestions were described to them as being Bernie Sanders tax reform ideas. When they were presented as being Bernie Sanders ideas, these young people said, ‘Oh, these ideas are awesome. They sound awesome. We’re gonna increase the child tax credit. We’re gonna increase the deductions for healthcare expenses. We’re gonna lower the tax paid by lower middle income people…’ because they thought it was a Bernie Sanders plan…” Listen to the full podcast below:

Follow more from the Health Ranger at HealthRangerReport.com or NaturalNews.com

Are you driven by PRINCIPLES or SOCIAL CONFORMITY? from NaturalNews on Vimeo.