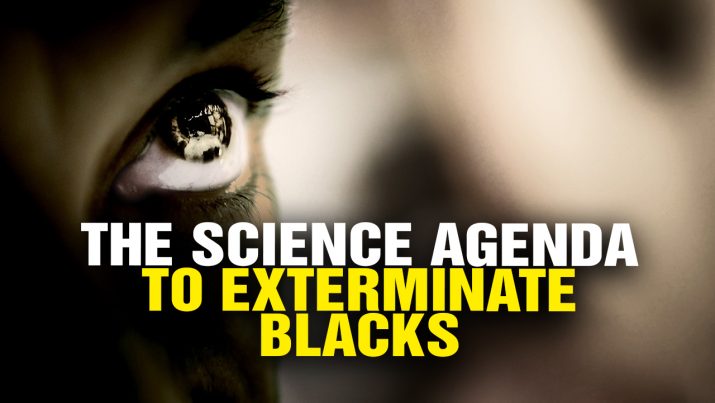 On November 7, 2017, Natural News will release a mind-blowing video lecture that documents the multiple vectors through which “science” and “medicine” continue a covert agenda to exterminate people of African descent from the human gene pool.

Going far beyond the Tuskegee medical experiments and Flint, Michigan lead poisoning schemes that specifically targeted blacks — and are widely acknowledged in the historical record — this stunning video lecture series by Mike Adams, a published scientist and lab science director (CWC Labs), documents the five vectors through which Africans are currently being targeted for elimination from the human gene pool.

Podcast Transcript: “If you’re black listen up. This is gonna blow your mind. There’s nothing I’ve ever done that is going to get me more attacked, smeared and slandered than this video lecture. November 7th, 2017 we’re launching a video lecture called “The Science Agenda to Exterminate Blacks.” This video is a culmination of over three years of lab science work and observations where I’m documenting covert vectors of infertility, sterility and extermination for those of African descent. What I’ve uncovered is going to be exposed. Again, it’s coming out on NaturalNews.com – a video on November 7th 2017. That’s the day that we are planning to release this video. It’s about an hour lecture, maybe a little bit shorter, and it covers these vectors of covert sterilization that specifically target black people. The reason that I am doing this, well I guess it’s the reason I do everything else, I can’t remain silent when I see these crimes against humanity taking place. For all I know, I may take flak from everybody on this. That’s not who I answer to though. I answer to a higher power and when I see this as a scientist, as a lab science director, as an award-winning journalist… you know I was awarded the citizens Commission on Human Rights Award several years ago for a journalism in the interest of protecting humanity. When I see this kind of stuff, I cannot participate in the cover-ups. I cannot go along with the genocidal agenda of modern science. I cannot go along with the nonprofit front groups that are running these campaigns in Africa and in downtown Detroit for that matter. I cannot go along with these agendas that are pushed through food, medicine, science, immunizations, abortions and so on that specifically target people of African descent. It’s sickening to me that we live in a world where people haven’t already blown the whistle on all this…” Listen to the full podcast below:

Watch the video at NaturalNews.com

The SCIENCE agenda to exterminate BLACKS from NaturalNews on Vimeo.