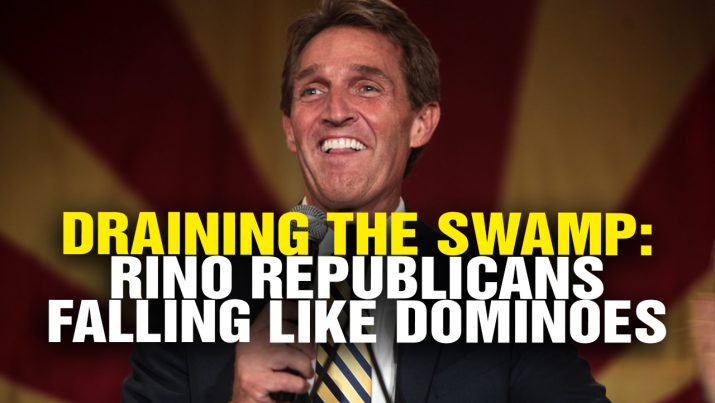 Draining the swamp! Jeff Flake announces he’s out of the Senate. RINO Republicans are falling like dominoes as real America takes over.

Podcast Transcript: “Draining the Swamp. We not have confirmation that Arizona Senator Jeff Flake will not run again in 2018. He’s out and on his way out of course. He dissed President Trump and had a lot of nasty things to say about Trump. “Gee, we’ve never heard that before.” He wanted to be original, Senator Flake. So, now we have Flake leaving, which is great. Now, if we just got McCain out of there too, then Arizona might have a chance to contribute to the liberty of this nation – rather than its downfall. John McCain he has become one of the most horrendous members of the Republican establishment. I mean absolutely horrendous, if not just an outright traitor to this nation based on some of the decisions that he has made to sabotage the ‘Make America Great Again’ efforts being pursued by President Trump. Tax reform, health care reform and so on. This is why suddenly the Left-wing media is loving McCain. Because he’s opposing Trump…” Listen to the full podcast below:

DRAINING the SWAMP: RINO Republicans falling like dominoes from NaturalNews on Vimeo.