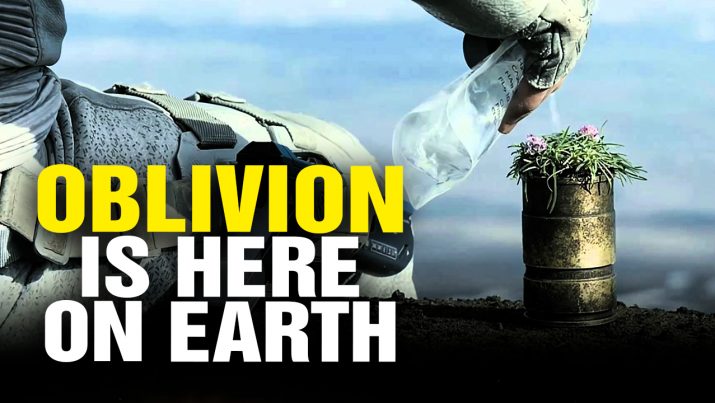 The Health Ranger reveals how the sci-fi story line from the fictional film “Oblivion” is eerily similar to exactly what’s happening on planet Earth right now, thanks to the brainwashing by the globalist-run media.

Podcast Transcript: “I highly recommend that you watch the movie ‘Oblivion’ starring Tom Cruise, because it depicts a dystopian sci-fi future that is really relevant, in a strange way, with what’s happening today. Welcome to the Health Ranger Science Podcast. You can hear more at HealthRangerScience.com, plus some interesting videos as well. Back to Oblivion, by the way, SPOILER ALERT, I am going to reveal some details about the film. It’s a must see film. In that movie, an alien civilization wants to take over planet Earth. They want to capture it. So, they nuke most of the planet and then they start taking away all of the water – they really want the water from the planet it seems, more than anything else. So, they have these huge machines that are literally sucking up the oceans to transport them back to where ever they are in the universe. And then they clone some humans and brainwash them to be the guardians of the water sucking machinery. Tom Cruise plays one of these cloned humans. In order to make these humans play along with the alien theft of all of the water on the planet, they brainwash the humans and they tell them that they are part of a rescue mission that humanity was invaded by aliens and humanity won. But the planet was destroyed and now they are all moving to a moon or Saturn …

‘Why is this relevant?’ Because we have been told by Al Gore, Leonardo DiCaprio, Barrack Obama, Bill Nye and others, that in order to save planet Earth, we have to eliminate a pollutant know as carbon dioxide, CO2. They say that CO2 is bad and if we don’t get rid of CO2, that Earth’s atmosphere will be altered chemically to the point where all human civilization will cease to exist. But in reality, carbon dioxide is the crucial molecule for all photosynthesis. Nearly every plant needs CO2.”

Listen to the podcast below:

Stay informed at NaturalNews.com and Depopulation.news

OBLIVION film reveals how YOU are being brainwashed to destroy the planet from NaturalNews on Vimeo.